Marginal Notes on the Agamben Scandal 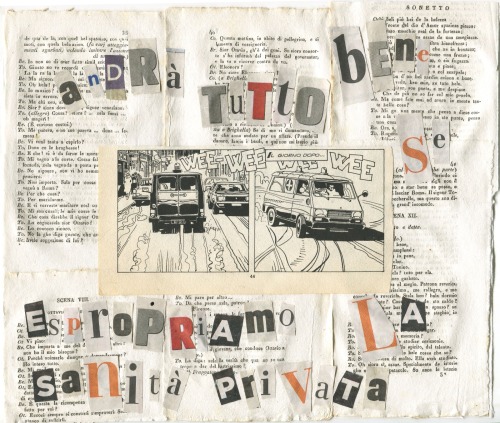 “Soon afterwards, something else emerged – yet another justification for incorporating the ‘Children’s Songs’ into the ‘Poems from Exile’. Brecht, standing before me in the grass, spoke with rare forcefulness: ‘In the struggle against them, it is vital that nothing be overlooked. They don’t think small. They plan thirty thousand years ahead. Horrendous things. Horrendous crimes. They will stop at nothing. They will attack anything. Every cell convulses under their blows. So we mustn’t forget a single one. They distort the child in the womb. We can under no circumstances forget the children.’ While he was talking, I felt moved by a power that was the equal of that of fascism – one that is no less deeply rooted in the depths of history than fascism’s power. It was a very strange feeling, wholly new to me.”

– Benjamin on a conversation with Brecht, 1938

It seems that what irritates many and persuades few about Giorgio Agamben’s ongoing reflections, deep down, is his rendering of the image of passive consent to the state of exception imposed by the coronavirus pandemic. An image that manifests itself as a normalized adherence to the injunction of the absolute primacy of bare life, a life reduced to mere reproduction, deprived of any attributes of the experience of freedom. The image of this consent would suggest that bare life is revealed as the only horizon, or value, remaining of human experience, which is tantamount to saying that the human now denies itself any experience: it reveals itself as an intuited fact, a fact that emerges today in these circumstances, and which was therefore already present before.

Incidentally, it should be noted that something else is proven to be pre-existing or proemial to pandemic management—something that applies to the historical proletariat, i.e. the industrial worker, as much as to contemporary workers of all kinds; something that reveals itself in the mirror image of the majority of elderly people left to die alone under the legitimation of social protection from contagion, while the truth is that after years of state sanctioned austerity measures there are not enough hospital beds; something to do with the fact that Italy, “no country for young people," is determined by the miserable distribution of income, ergo by the misery and predation of welfare—this pre-existing fact is that the injunction of biological reproduction is absolutely relative at a global scale according to different people’s privileges based on their geographical location, at a local scale, since social reproduction depends on the convenience of the economic machine, and finally at a time scale unique to each form of life with regards to the constant destructive forces of predation. So there is an experience of the thanatalogical power held by the present human society.

Yet in the present situation, the image given by Agamben, that is to say the one in which it would appear that the social cement to which we objectively seem to adhere is revealed to be the command of bare life alone, is not inexact. At least, as long as a mass consent to the suspension or disembodiment of social relations, under threat of losing basic biological reproduction, persists. But what does this mean?

In an important passage from 1955, Georges Canguilhem argued against identifying human social organizations with living organisms. Canguilhem argues that while every human society or rather human society in general is a collectivity of living beings, this collectivity is neither an individual, since it does not obey the laws of homeostasis of a singular biological organism, nor a species, since it cannot be confused with “humanity” which is always open to the search for its specific sociability, while society is by definition closed. Society is a means, a tool, says Canguilhem. It demands rules but has no capacity for self-regulation, and thus disorder is its only presumably normal state. For this reason, regulation cannot be left to an apparatus produced by society itself; it must come from elsewhere—and here, again through Bergson, Canguilhem goes back even more surprisingly to Plato on the same question Walter Benjamin had returned to in order to arrive at his critique of sovereignty and the law by philologically revealing its fiction: justice. Canguilhem uses justice according to Plato, a supreme form of society that is at the same time irreducible to its bodies, to make the Bergsonian opposition between wisdom and heroism work: unlike in the living organism, there is no wisdom in society, and the proof is that its normal state of crisis constantly gives rise to the need for heroes and heroisms who emerge in the background of a crisis situation and are then called upon to give it a solution—all of this of course legitimized by a representation of extreme danger that is the mirror image of the permanent sense of threat perceived by society in its precarious nature.

It is clear that, in spite of some contrived and astonishing Marxian syncretisms, which have unfortunately run their theoretical course, we are dealing with social reproduction in its materialistically determined distinction from simple reproduction.

Let us try to make Canguilhem work in what appears to be Agamben’s contradiction: between him capturing the political truth on the state of exception and an aporia of his current discourse on normality, the rule of exception as taught by the tradition of the oppressed—to borrow from Benjamin’s 8th thesis on the concept of history. What particular kind of adherence to the formal exception are we seeing in the face of this pandemic? Or rather, why is it that the injunction of bare life displays itself in this circumstance?

This pandemic is not the dengue, which still causes more infections and victims than the coronavirus in Latin America, or the yellow fever, that has made new massacres in the last two years from South East Asia to Africa. This pandemic is global because it threatens the definitive global relations of capitalist society. The virus starts in the central metropolis of the global construction industry, a haven for capital in the wake of the 2008 financial crisis, and then impacts primarily in China, Europe and the US, with the addition of the oil states and those engaged in conflicts in the Middle East. This explains the representation of the danger, but not yet the social acceptance that it is gaining: in order to grasp it, it is perhaps necessary to question whether this same support is in fact illusory. This does not exempt us from ascertaining the force of the historical reification of this apparent image and therefore from ascertaining, as Agamben does precisely by capturing the truth of this moment’s image as it presents itself to history, that adherence to the guarantee of bare life is the foundation of the social pact. But we know, precisely with Agamben and Benjamin, that both this guarantee and the social pact are a pair of fictions—in other words, a false synthesis of opposites: such as, in close kinship, that of sovereign legitimacy in relation to justice and law. What does the experience of the oppressed teach us about the relationship between the life-form of capitalist society and simple reproduction if not that this relationship is simply null and void? That the mission of capitalist society, reversed through thirty years of globalization, is precisely exclusion, disinterest, the power or profit to command freely, independently from any guarantee of biological reproduction? It is this truth, affirmed in the practice of governance and introjected by the oppressed, that is now laid bare: the injunction to isolate and the suspension of social life are accepted precisely because it is at the moment in which society—and, coincidentally but separately, biological life—is most endangered that the whole experience of the divorce between the two finally condenses. In other words, individuals suddenly become conscious that it was power itself that laid down the fiction of the social pact in the first place: and therefore, it is the reality of society itself that is laid bare, its pure coincidence with power, and its powerlessness to produce any stability, any healing for the sick, any protection for life.

It is true that in this instinctive recording of the truth about society and power the injunction to cling to bare life as the sole horizon of social behavior is reproduced: but it would be better to say that it is reflected in it. On the one hand, in fact, power enjoins the suspension of social life as a necessary condition for its own re-legitimization; on the other hand, this same suspension finds acceptance among people only as a condition consciously forced upon them by the evident fact that power and its social organization have no capacity to defend life effectively. In this dichotomy and beyond the instantaneous image of a forced convergence we can glimpse the crossroads between forms-of-life that are being prepared. On one side of this crossroads, there is an emergent form-of-life which, accepting the nakedness of society and power, secedes from it in order to affirm the value of life as an encounter and the mutual aid of bodies in their affections, thereby re-opening the horizon of a free experience, and on the other side a form-of-life imposed as a reproduction of society and its command, reconfigured exactly on the acceptance of the truth of their substantial powerlessness to protect life, bodies, and affections as what is common to us, and indeed on the acceptance of their destiny to separate us in the face of a distribution of death. And it is all the more so true—as seems to be the case in our present situation—that the reconfiguration of capitalist society and its general relations of power take the form of a predominance of digital capitalism, of data capture and of a predictive function of the devices of control: that is, of a total grip on the biological that at the same time mineralizes it.

In this sense, as shocking as the image used by Agamben, the anonymous article, “What the Virus Said,” published by Lundimatin appears to be a discursive operation with a different effectiveness and power: precisely in its address to the current form—captured at this moment—of the average social behaviour and to place itself ahead of that choice. A choice that seems to take on a global body in many different signs of conflictual life, which tend to dispel the crystallized image of a common decision on life itself paralyzed in the capture by the naked thanatocracy to which corresponds the automaton that we have come to call the Leviathan.